I sailed with my son on his new boat from the Cranberry Island to Bucks Harbor, via text.

He took off Wednesday afternoon to meet up with friends from school on Great Cranberry Island. With an overnight in Pulpit Harbor, he sailed quickly nearly all the way to the Cranberry's. No doubt there was a party with the friends and I could hear him yawning on the phone today. And he got a late start.

I've been quite handy sending my text weather updates and local knowledge to his iphone 4 which (with Navionics) is his sole navigating system. This is quite an a step forward as the last few years, he and friends sailed on another boat with nothing to navigate(occasionally one chart).

He had great visions of blasting home. I knew that wouldn't be the case(but kept that to myself). After a couple hours he was only 5 NM out of the Cranberry's. But I told him if he stuck it out the current would turn his way. And the wind, which was increasing around me in Rockport, was forecast to turn a little bit more South.

He had hoped to sail the Fox Island Thoroughfare(I knew that wasn't going to happen in the Southwesterlies blowing 15+). But he did the right thing and peeled off for the Eggemoggin Reach. Fortuitous! I knew he'd be in sailing Nirvana. But he also found himself in the middle of 40 classic boats coming in on the Camden Feeder race. They'll all race in the Eggemoggin Reach Regatta tomorrow. He was having the time of his life. "Dad, I just smoked a boat twice as long as mine!"

It must have been fantastic there today. And I knew he'd make great time screaming down the Reach and suggested he pull into Bucks Harbor(I knew he wasn't far).

"Thomas, you've been under that bridge many, many times." Oh well, caution is good.

I even got a few selfies. 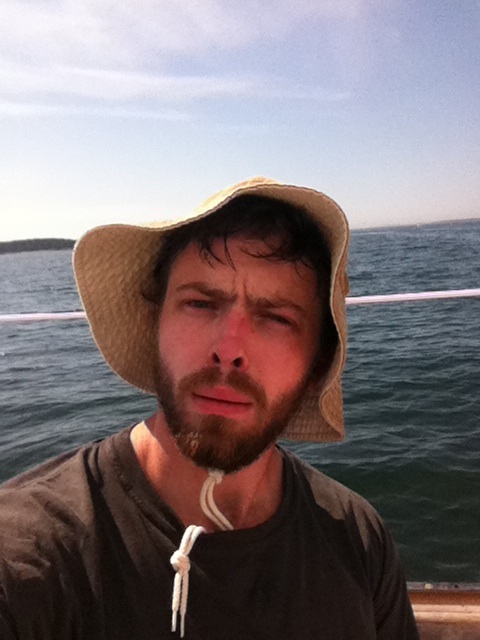