We used to prefer inflatables for our tenders, but we went through three of them in ten years -- and we weren't buying PVC crap. Two Avons -- a 10-ft sport boat and a 12 foot cruisers tender -- and an Achilles sport boat.
We just killed those boats. Hard daily use and the 'Rob treatment' meant that we spent ten grand on rubber boats. These are good boats that usually last decades. LD's Dad has had an Avon for over 30 years. We also carried an 8-ft sailing pram as our 'second car'.
So eleven years ago we were house sitting in Gig Harbor for some folks who had mooring ball outside and a wood shop in the basement. I asked Gerry if I could build a boat and he said as long as it would fit through the shop's doors (to get it out), I could build whatever I wanted.
Our friend Jon Eisberg, who passed away suddenly last year and is greatly missed, had built a 9-ft Spindrift nesting dinghy that turned out beautifully. It looked like it had come off a showroom floor! I was inspired, but wanted something bigger. I settled on the 11-ft version because, when nested, it would fit perfectly under Silent Sun's boom.

After four months and $2500 in materials (I overbuilt it because of how hard I am on things), we had a beautiful finished boat...that I now had to cut in half with a $10 saw! I had to ask LD's Dad to start the cutting because I couldn't bring myself to do it.
Over a decade of hard use -- from 'big sand' up in Alaska to San Diego, countless beach landings, hard sailing, and more capsizes than I care to admit -- we've replaced the sail once, the mast twice and the rudder three times. Last week, I finished Blue Moon's third 'refit' -- repairing some spots and painting. Now she's ready for another 11 years of the 'Rob treatment'! 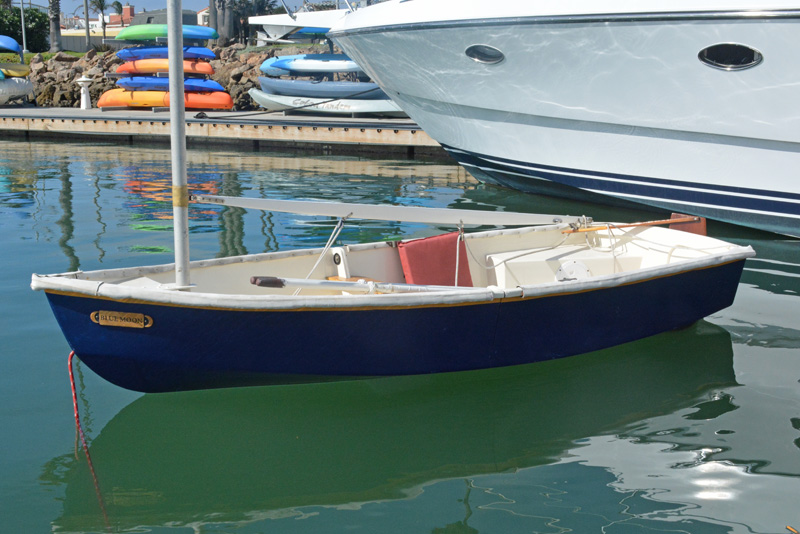