I skipped central heat in this old house and have direct heat sources.

In Response To: Pellets ()

In fact during the initial rebuild I installed radiant heat tubing in slab and floors(but abandoned the idea). Our house is half 1850 and half 2000 (but it looks all 1850 from the outside, I'm told).

I was never happy with the inefficiency of central heat in new houses I built. The inefficiency of delivering the energy to remote areas isn't efficient. All or nothing and then it seemed you needed a point source of heat if you wanted to feel warm on cold days.

We've had a pellet stove (not the best) since 2006 and have added an air source heat pump with two outlets (1 and 2nd floor). Those two sources of direct heat work very well together as the HP moves air(adding as much as 300% energy efficiency).

I've installed a supplemental German electric wall heater in our large bathroom. That heater works on a timer so we use it when you need it, it shuts down. I'm installing 3 more of those in the future to function when needed. (It costs 15 cents for 20 minutes of heat - 100% efficient).

The house is designed (all new inside an 1850 shell) with a stairwell air shaft (3 floors) to move the air. That works pretty well keeping the third floor bedrooms cool for sleeping(which we prefer). It's an open plan downstairs to make heating easier and more efficient.

And the house is generally divided in half(with provisions to open it through out). We 'live' in the front half - three bedrooms on three floors - which is about 2000 sq. ft. The 'back house' is another 1000 sq. ft. but is designed not to be heated if we don't need it(it has it's own fossil heater). Right now, we rent that in the summer.

That's confusing enough! It's sort of an experiment. I predict fossil fuel will make central heating systems a little obsolete in the future(depending upon the building). Electricity will become more the norm as alternative producers evolve. My ideas are based as much on space design as heat source. So many houses are hard to make comfortable due to design.

The pellet stove takes an effort. It's just hopper type. I load 40 pound bags into the top. It takes cleaning(Old-new designs are better), but a lot less than a woodstove in day to day effort. 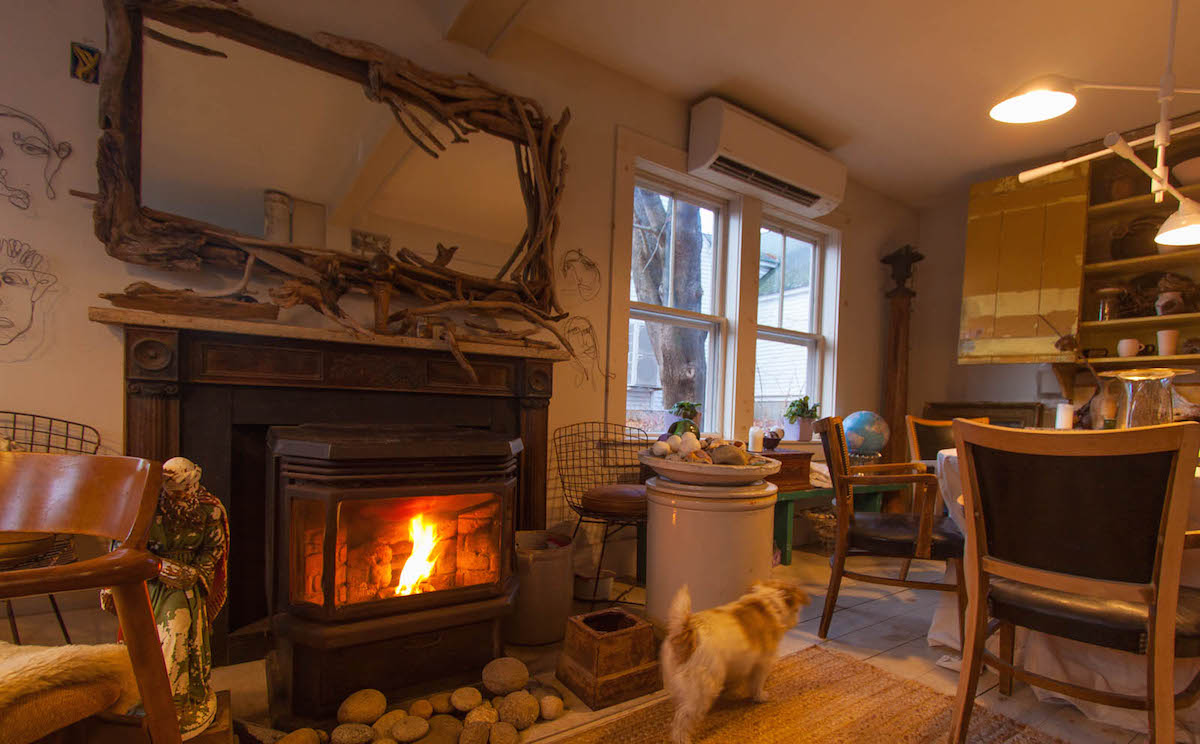