Fessing up (guess I need to change my posting name, too)

It's been quite a while since I've posted much here. The reason is in the photo below. You know how the story goes... we weren't using the sailboat... we're getting older... we figured out (finally - we're a little dense) that one of the major reasons was that we were getting beat up on the 22 ft. sailboat... we're not as agile as we used to be... we missed being out on the water (the kayaks are wonderful but....) and so we've poked about looking at larger sailboats and powerboats the last couple of years.

It wasn't until we saw a Rosborough at a boatshow in April that we thought "hmmm, this could work." We'd already just about decided that at our ages, a larger sailboat didn't make a whole lot of sense.

From there things moved very quickly. We found a used but fairly new one in NC. One trip on the boat on the Neuse River convinced us that this could really work. I think it was the doors on either side of the helm that made us still feel like we were out on the water. Our offer was accepted 2 days later. Amazingly Fretless sold quickly to a younger couple from Virginia who have already had her out quite a bit.

We'd hoped to bring Tara back to MD in early June but things didn't work out for that so we ended up bring her up from Oriental NC to Rock Hall MD in early July in the 94 degree heat. Fortunately the boat has air conditioning when on shorepower but what had been planned as a leisurely trip up the ICW turned into a marina to marina delivery. Nevertheless, we had a great time and are looking forward to revisiting our favorite anchorages. Now that it's started to cool down, we've discovered that it's easy to put the kayaks on the roof, anchor out in a favorite spot and go paddling. Hoping to do a lot more of that this fall once we get back from a couple of jaunts in the travel trailer.

I took a lot of photos and created a page for Tara the Rosborough on Facebook (it's a public page so you don't have to be a FB user to see it.) The narrative of the trip North is all in the captions to the pictures so just click on Photos on the left menu and then 'more albums' and start with the earliest album to get the full story of the trip. https://www.facebook.com/TaraTRosborough/ 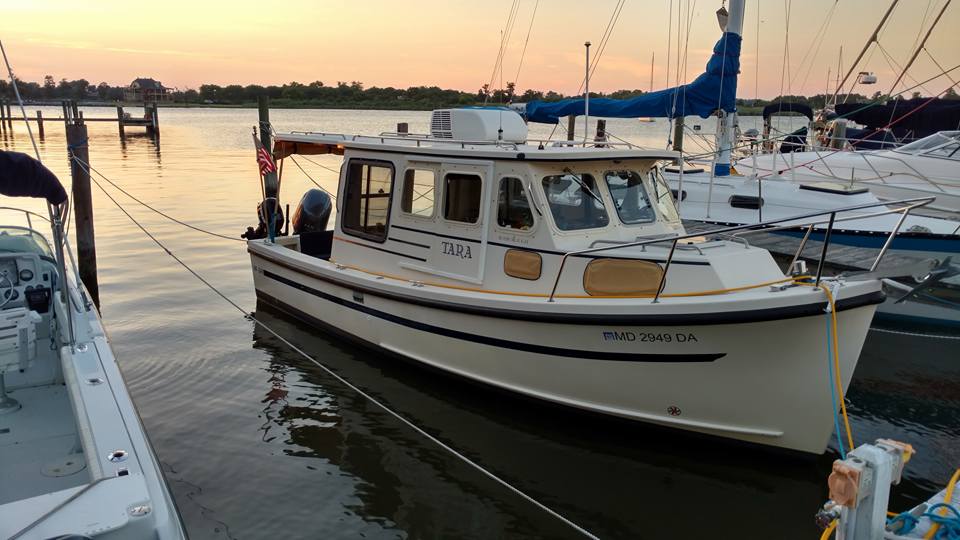