In Response To: roller furling issue ()

I took the binoculars and stopped down at the boat last night. The halyard and furling mechanism at the top of the foil looks fine, the setup on the spar is pretty clever, it would be very difficult for the halyard to wrap on the foil unless there was no tension at all due to the angle of the halyard.

I replaced the furling line over the winter so it was still smooth and slippery the first couple of times out. It is now showing some wear and the texture is adding to the friction on the line guard. The perfect answer would be to rotate the guards about 45*, however I'm not sure I can do that. It was 88* and humid last night, I was in long pants after work and was losing troubleshooting momentum(and sweating like a pig) after a half hour or so. It appears that the line guards clamp on, although I'm not sure about the piece where the toggle strap attaches. This will require more attention then I had to give last night, it looks like a weekend project. If I can't loosen and mover those guards I have no idea how I'm going to solve this. The ideal angle for the furling line is straight in on the center line of the boat/furler. I have seen other boats mount a padeye in the center of the foredeck just aft of the stem fitting with a ball bearing block attached. I my case, that is the anchor locker hatch so there is no way to do that. It will have to be figured out before we leave the dock again. 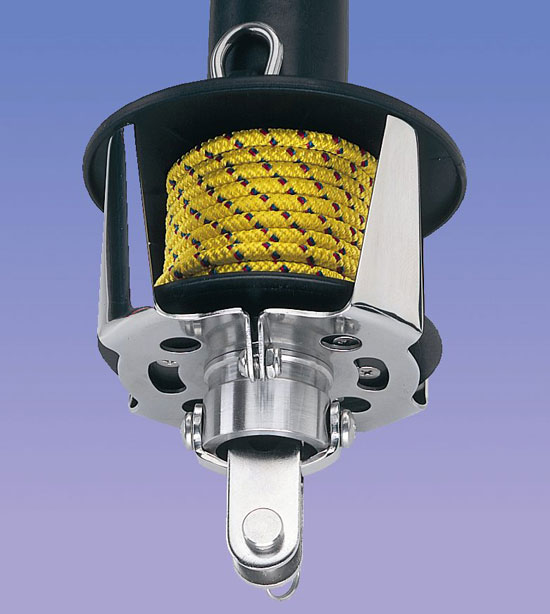