In Response To: Could take a bit of water, then just moisture to keep the deterioration going? ()

It was already delaminating when I bought the boat 6 years ago... so whatever condition it "was" in, I don't know. The edges were somewhat protected by the silicon sealer used to glue the top to the tank.

There is a wide 1.25-1.5 inch lip around the top of the tank that the lid sat into... that lip was filled with an RTV like silicon sealer and apparently the glassed and gel coated one side plywood was laid on top of the sealant. Formed what appeared to be a good seal all around. I have cut the seal, and am scraping out that old sealant. It feels just like well cured RTV... still pliable, but cured. Oh the whole thing was held down with screws and washers about every 3 inches.

The top came off in layers... thin plys barely held together... and filled with mold (yuk). The bottom 2-3 thin plies (next to where the water was) are a rigid thin layer of cured resin and gelcoat and wood (about as thick as a guitar skin). I am peeling that off to get to the whole open tank. It is brittle and just snaps apart. I have to peel it off at the edges where the sealer held it in place.

The whole thing was about a 1/2 inch thick. (I will verify that thickness before making a new top, which I want to fit flush.)

The top was never wet when I was using the tank... so that speaks something to the inner gel coat and outside seal... but the whole thing was a mold and laminate mess... the different plys being something like old parchment paper, albeit, thicker, but all wavy and brittle.

I will replace the top with a single piece of PVC sheet plastic, and seal it the same way. But I got to thinking about what caused the failure over the years, and figured it may have been condensation. I'll get a new "mattress" made, using the old one as a template. But I'll use better, denser foam... heck it may even be comfortable.

And following Tom's observation, and others... I will build a "deck" above the tank lid, so air can flow through there. There is an area outside where the tank is, that is just solid FRP... the legs of the "deck" can rest on that and should not be a problem. In fact thinking about it... I will likely build this "deck" with slots in it, (make it out of a bunch of slats) much like a regular wooden deck... just to give more area for air flow. Shoot, bet it outlasts the rest of the boat. GRIN

Below is a shot of the top on my workshop floor... it is sitting on cardboard as it is so flimsy. You can see the inspection port. (I will have 2, as there is a baffle in the tank) You can see the holes around the outside, and how it is just a bunch of disconnected dirty plys at this point. 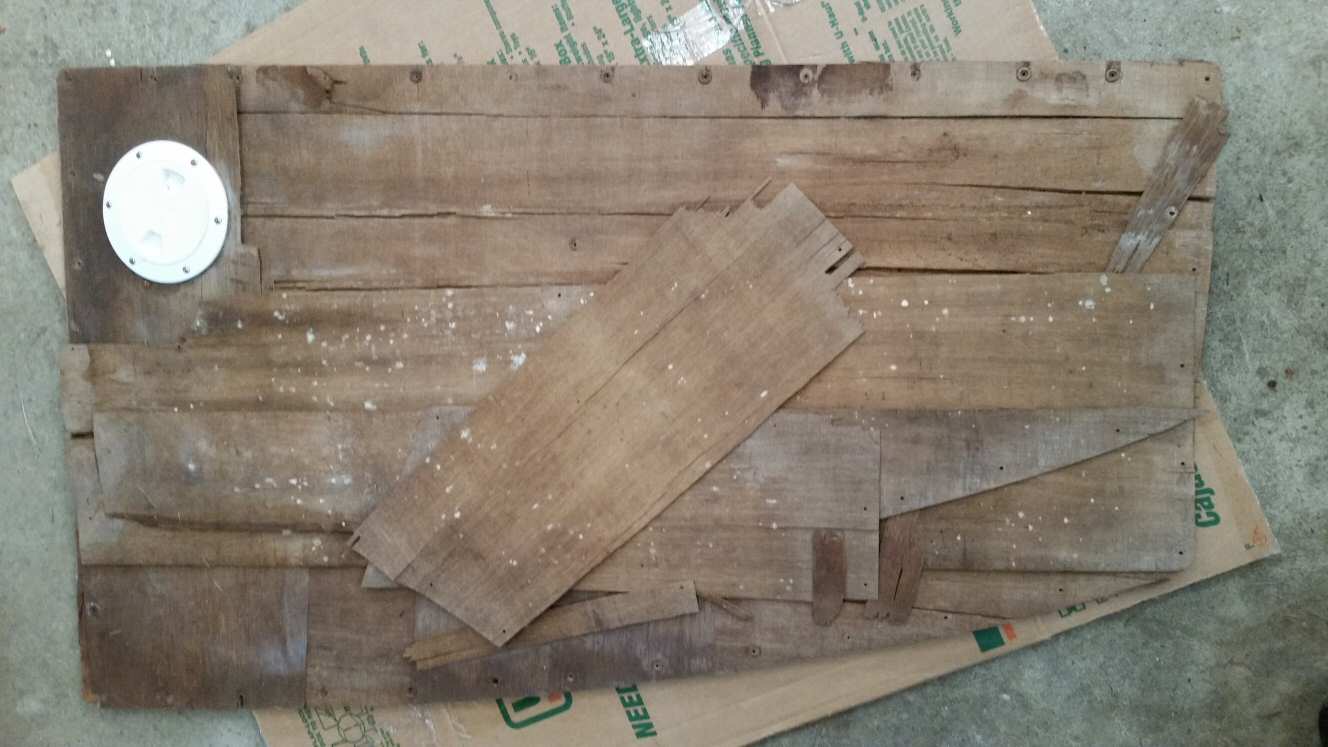